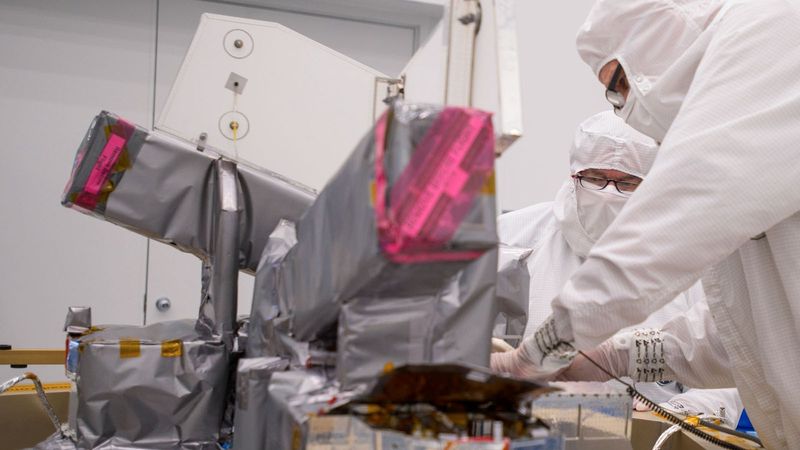 Engineers are pictured in this 2016 photo preparing the Michelson Interferometer for Global High-resolution Thermospheric Imaging (MIGHTI) instrument as part of the ICON payload. (Allison Bills/SDL photo)

In a recent study published in the journal Geophysical Research Letters, researchers used data provided by NASA’s Ionospheric Connection Explorer satellite, or ICON, to conclude that the effects of a volcanic eruption earlier this year reached into space. Utah State University’s Space Dynamics Laboratory developed cameras in two of the primary instruments on board ICON and led the payload integration and test activities for NASA.

On Jan. 15, a submarine volcano erupted 40 miles north of the Tongan island of Tongatapu. The Hunga Tonga-Hunga Ha‘apai volcanic eruption was heard from Australia to Alaska. A shock wave from the blast traveled 670 miles per hour into the atmosphere — carrying with it a giant plume of gases, water vapor and dust, according to NASA. Together with data obtained from the European Space Agency’s Swarm satellites, ICON data helped scientists determine that the volcanic eruption’s effects produced winds at up to 450 miles per hour and unusual electric currents in the ionosphere.

The SDL-developed camera for the Michelson Interferometer for Global High-resolution Thermospheric Imaging — or MIGHTI — on board the ICON satellite provided scientists with neutral wind profiles between 60 to 200 miles in altitude that were derived from remote observations of green and red airglow emissions.

“Launched in October 2019, ICON is helping scientists better understand how space weather interacts with phenomena on the Earth such as the Hunga Tonga-Hunga Ha‘apai volcanic eruption,” said Alan Thurgood, SDL’s director of Civil and Commercial Space. “SDL is proud to have supplied enabling technology for NASA’s ICON mission, helping scientists to learn more about this relatively little-understood region at the edge of our atmosphere. The dedicated employees of SDL are hard at work on the forthcoming Atmospheric Waves Experiment, which will further enhance knowledge of the important phenomena that can affect everyday activities on Earth.”

In 2019, NASA selected SDL to build an instrument that will further investigate how phenomena on Earth such as volcanic eruptions, winds rushing upward over mountain ranges, or large thunderstorms affect space weather. Planned for launch in 2023, NASA’s Atmospheric Waves Experiment, or AWE, is led by USU Physics Professor Michael J. Taylor.

AWE will fly on the International Space Station to study atmospheric gravity waves in Earth’s atmosphere to help scientists gain a deeper knowledge of the connections caused by climate systems through our atmosphere and between the atmosphere and space.