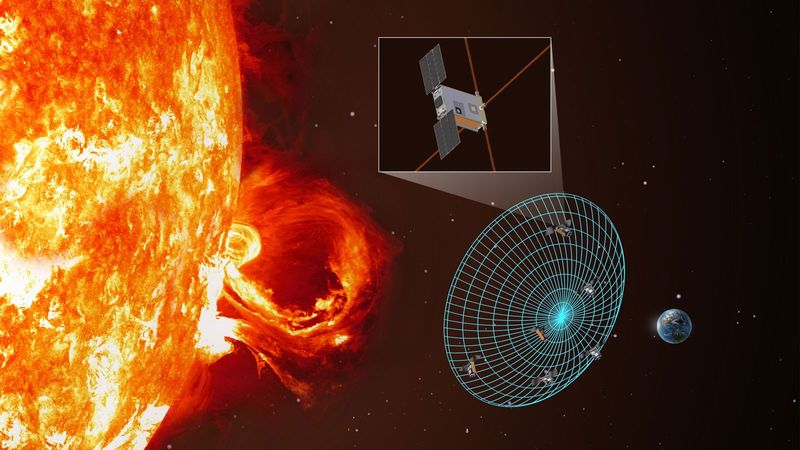 The Space Dynamics Laboratory at Utah State University announced that it has been awarded a contract by NASA’s Jet Propulsion Laboratory to build six spacecraft for NASA’s Sun Radio Interferometer Space Experiment mission, known as SunRISE. The contract value was not disclosed.

SunRISE is led by principal investigator Justin Kasper at the University of Michigan in Ann Arbor and managed by JPL in Pasadena, California. It is scheduled to launch as a hosted rideshare with a commercial satellite in 2023. Once launched, the constellation of six CubeSats will fly in a loose formation acting as a single radio telescope to observe radio images of low-frequency emissions from solar activity and share them via NASA’s Deep Space Network.

“SDL is pleased to partner with NASA’s Jet Propulsion Laboratory to support this NASA Mission of Opportunity, providing the agency with technology that enables relevant science by pairing new, relatively inexpensive small spacecraft with launches on larger spacecraft already approved and preparing to go into space,” said Asal Naseri, SDL’s satellite technologies branch head. “SDL is a leader in the small satellite revolution, which promotes technological advances that can be rapidly built in smaller packages at lower costs than larger, traditional satellites.”

Earth’s atmosphere blocks the low-frequency radio signals that SunRISE is designed to study. The SunRISE CubeSats will fly within 10 kilometers of each other in a supersynchronous orbit, creating three-dimensional maps that will determine where large particle eruptions come from on the Sun and how they evolve as they expand outward into space. This new data will help scientists learn what triggers and accelerates these colossal jets of radiation. The six individual spacecraft will also work together to map, for the first time, the pattern of magnetic field lines reaching from the Sun out into interplanetary space.

SunRISE is designed to observe powerful solar storms that send trillions of tons of charged matter towards Earth. These storms have broad implications for life on Earth and beyond. Solar storms feed into Earth’s complex space weather system, which, just like terrestrial weather, affects many of our daily Earthbound activities. Space weather can knock out power grids or block radio communications. Solar storms can also affect space systems, damaging Earth-orbiting satellites or endangering future astronauts who will travel to the Moon or Mars. SunRISE data will provide insights into solar physics and space weather that will help us predict and prepare for future solar storms.

“SunRISE represents a continuation of SDL’s decades-long legacy with NASA to provide technologies that help achieve the agency’s mission to ‘drive advances in science, technology, aeronautics and space exploration to enhance knowledge, education, innovation, economic vitality and stewardship of Earth,’” said SDL SunRISE program manager Tim Nielsen. “Working together with JPL, the engineers, scientists, technicians and business professionals of SDL are dedicated to ensuring that the SunRISE mission supplies scientists with new information to understand better how solar activity affects our everyday lives.”

CubeSats provide access to space for small payloads and generally have a mass that is less than 24 kilograms and a size smaller than suitcase. At launch, each of the SunRISE CubeSats will weigh just 11 kilograms and measure 36 centimeters high, 24 centimeters long, and 12 centimeters wide.

SDL is a nonprofit research laboratory with Utah State University that has been solving the technical challenges faced by the military, science community, and industry for six decades and supports NASA's vision to reveal the unknown for the benefit of humankind. As one of 14 University Affiliated Research Centers, SDL serves as a subject matter expert in its core research areas to the US Government, ensuring that essential engineering and technology capabilities are maintained. SDL is headquartered in North Logan, UT, and has offices in Albuquerque, NM; Bedford, MA; Dayton, OH; Huntsville, AL; Houston, TX; Los Angeles, CA; Stafford, VA; and Washington, DC. For more information, visit www.spacedynamics.org.