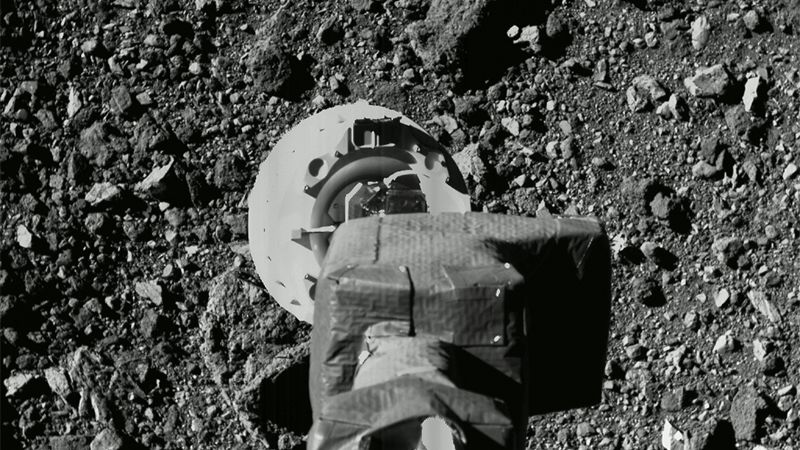 This series of images, captured on April 14 during the first rehearsal of the OSIRIS-REx mission's sample collection event, shows the SamCam instrument's field of view as the spacecraft approaches and moves away from asteroid Bennu’s surface. The rehearsal brought the spacecraft through the first two maneuvers of the sampling event to a point approximately 213 feet (65 meters) above the surface, before backing the spacecraft away. The Space Dynamics Laboratory built the SamCam camera detector assembly for OSIRIS-REx. (Credit: NASA/Goddard/University of Arizona)

OSIRIS-REx traveled more than two billion kilometers to Bennu following a successful launch on September 8, 2016, aboard a United Launch Alliance Atlas V rocket from Florida’s Cape Canaveral Air Force Station. Its mission is to answer questions that are central to the human experience—the origins of our planet and our destiny. OSIRIS-REx will provide scientists with answers to those and other questions by collecting a sample from Bennu, a carbonaceous asteroid whose rocky surface may contain evidence of the beginnings of our solar system.

“The Space Dynamics Laboratory built the camera electronics for the three-camera suite aboard OSIRIS-REx, called OCAMS. SamCam will photograph the sample acquisition event on Bennu,” said Alan Thurgood, director of SDL’s Commercial and Civil Space Division. “The other onboard cameras SDL helped to build enabled NASA to acquire images of Bennu from approximately 1.2 million miles away, and map the asteroid.”

Bennu was chosen for the OSIRIS-REx mission due to its proximity to Earth, its size, and its composition. At the time of the asteroid’s selection in 2005, there were only 192 asteroids classified as Near-Earth Objects (NEOs) that were close enough to be accessible. Of the 192 known NEO asteroids, only 26 had a diameter larger than 200 meters. Asteroids with small diameters rotate more rapidly than those with large diameters. Asteroids less than 200 meters spin so rapidly that the loose material on the surface, known as regolith, can be ejected from it, precluding material collection. NASA also looked for primitive asteroids—those that are carbon-rich and have not significantly changed since they formed nearly four billion years ago—that contain organic molecules, volatiles, and amino acids that may have been the precursors to life on Earth. Bennu is one of only five asteroids that met all the criteria.

In December 2019, NASA approved a sample collection site on Bennu following a year of searching. Dubbed Nightingale, the location is in a crater in Bennu’s northern hemisphere. Over the next several months, OSIRIS-REx will continue rehearsing the sample collection, after which the spacecraft will collect a sample of regolith from the surface of the asteroid during a touch-and-go maneuver.

“We are grateful to the Space Dynamics Lab for their important technical support of our imaging systems. The OCAMS instrument has provided unprecedented coverage of a planetary body, thanks in large part to the SDL detector assemblies,” said OSIRIS-REx principal investigator, Dr. Dante Lauretta at the University of Arizona.

SDL has been solving the technical challenges faced by the military, science community, and industry for six decades and supports NASA’s vision to reveal the unknown for the benefit of humankind. As one of 14 University Affiliated Research Centers, SDL serves as a subject matter expert in its core research areas to the US Government, ensuring that essential engineering and technology capabilities are maintained. SDL is a research laboratory headquartered in North Logan, UT, and has offices in Albuquerque, NM; Bedford, MA; Dayton, OH; Huntsville, AL; Houston, TX; Los Angeles, CA; Stafford, VA; and Washington, DC. For more information, visit www.spacedynamics.org.